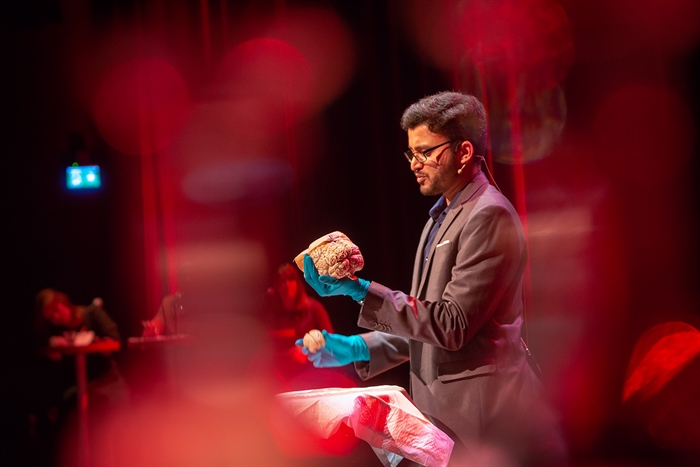 Pitches by a new generation of scientists
Radboud Talks

On Tuesday night April 7 the eight finalists of Radboud Talks, coming from different faculties of Radboud University and Radboudumc, will compete for the grand jury prize and the audience award!

Besides pitches, there will be a musical performance by Student Big Band Nijmegen and a literary closing by writer Laurens van de Linde from production company De Nieuwe Oost.

In a thrilling competition between young scientists from Radboud University and Radboudumc, science is presented in a way you’ve never seen before. On April 7, eight scientists have exactly 180 seconds to pitch their research to a live audience (you!) and a sharp-sighted jury. And no-no-no traditional PowerPoint presentations or boring charts are allowed! Instead, you will listen to driven scientists with inspiring stories in their best form.

ABOUT
The Student Big Band Nijmegen plays classics from the Big Band genre, but also more ‘inventive’ music like emerging jazz and fusion. At Radboud Talks they will appear in a smaller but no less exciting ensemble.

Laurens van de Linde (1993) is a writer and musician. He published in VOX, on De Optimist, in the literairy podcast Ondercast, and he performed during the Valkhof Festival, Festival de Oversteek and the Nijmegen Book Festival. Laurens is also in a literary boyband that recently played Lowlands.

This programme is mostly in English, but some of the pitches will be in Dutch.

Take a look at the winning pitch from two years ago.